You are here: Home / BalanceWear® News / Terry, A Patient Success Story: From Wheelchair to Freedom – [Video] 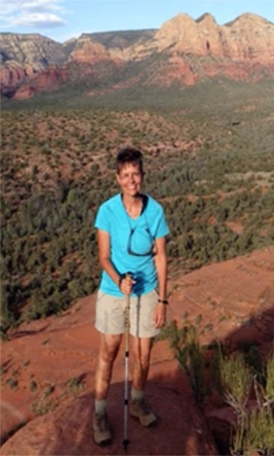 Terry Hayes from Fort Meyers, Florida has quite a story. Terry contacted Motion Therapeutics in July of 2013. Terry had a diagnosis of cerebellar degeneration. She was discharged from physical therapy because she was not making progress. Her doctor told her she would remain in the wheelchair for life. Terry did not want to accept this.

She went to see Andy Lesher MSPT in Bala Cynwyd, PA. She received her BalanceWear July 2013. She began working with her partner to walk…stating “I couldn’t stop, I would fall and my partner had to catch me.” After a few months Terry was walking with two hiking poles and a helmet. Here is what Terry did to help herself:

By September Terry was able to walk with one hiking pole. By November she started walking without any hiking poles but still wearing her BalanceWear. She continued to walk for 500 miles the next 4 months. Here is the video clip documenting her progress.