You are here: Home / BalanceWear® News / Interview with Daniela Lee about her BalanceWear Success Story 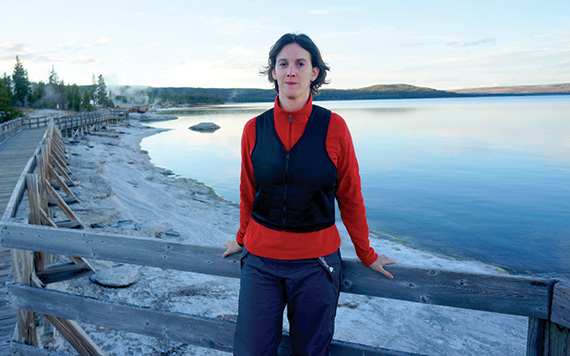 Daniela Lee was diagnosed with MS at age 40. The disease limited her mobility and hindered the active lifestyle that she previously enjoyed. But thanks to BalanceWear, she is surpassing the limitations of her diagnosis and reclaiming the activity and independence that she once took for granted.

How did you first hear about the vest as a potential therapy?

I read an article about the BalanceWear balance vest in the National MS Society’s quarterly newsletter. The article described how the vest could improve balance. Given the fact that balance loss was one thing that I had been suffering greatly from, that was enough to get me interested. I looked up the BalanceWear website, and reached out to Cindy.

Cindy put me in touch with a very helpful Kaiser physical therapist in Richmond – Judith Fairchild. The fitting session was fast, but also uncomfortable at times – the initial pushing to assess my balance made me dizzy and very fatigued. I had to sit down and rest. Then she told me there were a couple more tests with the vest on. She moved the weights around to places that made sense according to my specific balance issues, and then said that she was going to push me again. I was already thinking “I don’t want to be pushed around again – it’s so uncomfortable!” But then she pushed me and it was a night-and-day difference. I was still a little wobbly, but I didn’t need to reach out and grab her; I was able to catch myself. By the time she finished the testing and figured out exactly where the weights should go, she could push me and I literally did not even move. I could just stand there. It was beyond what I was expecting! Furthermore, my dizziness and fatigue were both gone – I had recovered within ten minutes from my initial discomfort. It was a very positive experience with BalanceWear right away.

After the initial fitting session, how did you feel about BalanceWear?

I only wore the vest that first day for ten minutes in her office, but when I got home, the effects lasted all day. I was still walking at 11pm when my husband came home – I didn’t want to go to bed! My husband looked at me and said “you’re really walking normally, I can tell!” I was running up and down the stairs no problem. The next morning, the effects were slowly fading. From then on it was absolutely clear that BalanceWear was something I had to get. It was such an immediate effect. It was an incredibly powerful, life changing experience – I can’t describe it any other way. I felt like I was back to normal, back to how I used to walk. I’ve had issues walking, even before my diagnosis. To get walking back… people take walking for granted. It’s only when I couldn’t do it any more that I realized how important it was, for mobility, independence, and daily life.

What I realized later, once I got my own vest, was “I don’t have to think about how I’m going to take my next step.” Before, I had to map out my path, think about where I would place each foot for every step – even short 20-yard walks felt like the effort of climbing Mt. Kilimanjaro. But with BalanceWear, I feel like I have little motors in my feet.

How often do you wear the vest?

At the beginning, I was wearing it four hours a day. Pretty quickly I realized that I don’t have to wear it every day – I would still have residual positive effects the following day, so I started playing around with it. “How long will the effects last if I wear it for two hours? What about if I wear it every other day? When will I need to wear it next?” It blows my mind how it works, why it works, and how Cindy came up with the idea.

I can definitely tell when I’m wearing it, but it’s not cumbersome. It’s a positive feeling, because the plastic within the belt that goes over the front makes me feel strapped in – I feel that much more secure.
The only negative aspect is that in the summer it gets very warm because you’re strapped in and there isn’t much room for air to circulate. It can get uncomfortably warm. With MS, heat is one of the really negative outside influences – it brings on fatigue and dizziness, so even though the vest is countering your balance issues, you’re still dealing with the dizziness and the fatigue. A lighter vest would solve this problem.

What are you able to do now that you weren’t able to do before BalanceWear?

BalanceWear has absolutely given me a new sense of confidence in my abilities and my potential. I do still have symptoms that are not related to balance, and I’m aware that the vest is not going to fix those – it’s not a panacea. But I can walk normally, even jog. Before, jogging was not possible, but now, I can jog almost a half mile. I can go downtown to the farmers’ market and get what I need, without having to rest in the car for ten minutes before and after walking around. It’s such a simple thing, but believe me, it’s a big step forward.

What advice would you give to people wondering if BalanceWear is right for them?

Get assessed. Try it out, even if just in the PT’s office. You might feel right away if it makes sense for you or not.

I’m very open about my experience with BalanceWear and MS. If people want to get in touch with me, they are welcome to reach out to me, and I’d be happy to talk to them.