After living with Parkinson’s disease for three years, Scott found BalanceWear and saw it improve his stability. We interviewed Scott’s wife, Mary, about Scott’s experience with BalanceWear. 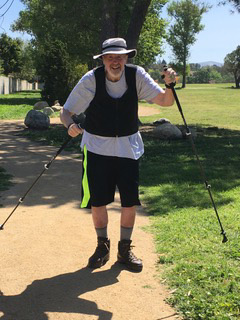 When did Scott first start experiencing PD symptoms? What were they like?

Beginning in 2010, Scott started showing symptoms like soft voice, difficulty writing, stiffness of joints, and changes in his facial expression.

How did you hear about BalanceWear?

In 2013 we had asked our neurologist at Cedar Sinai if anyone had tried a weighted vest for gait and balance issues (Having worked in special education most of my life I was aware of proprioceptive principles and sensory feedback). The previous week our neurologist had met with Cindy Horn in his office while she demonstrated the BalanceWear vest. A few months later, previously arranged, we met Cindy and our neurologist both at a neurology conference in SD. With a few other doctors observing her, Cindy evaluated Scott.

What was Scott’s BalanceWear fitting session like? What were your and Scott’s initial reactions?

Scott’s first vest fitting was in 2013. Scott walked with and without the vest, and swung his cane to mimic a golf club and he realized the difference. It was impressive to see how much more stable he was with the vest. Later that year, Scott had knee replacement surgery. He also encountered weight loss due to other illnesses over the next few years, so the vest didn’t fit him any more. We wanted to revisit the vest for gait and instability issues. The second vest fitting was in early 2017. Cindy is clearly knowledgeable and experienced. She has a knack for finessing the subtle tweaking needed to make the placement of the weights just right to counterbalance the issues of instability. Overall the fitting sessions were positive, easy, and comfortable experiences.

How often does Scott wear BalanceWear?

Currently, Scott wears the vest for physical activity such as golf, going to the gym, and even standing or walking for any length of time. He feels confident in his balance when he wears the vest. He generally does not wear the vest in the house. He is anxious to try the new lighter weight materials being considered for future vests. Scott feels that the right combination of material, fit, and periodic weight adjustments will enable him to wear the vest all day.

What does BalanceWear help Scott do now that he couldn’t do before?

Scott loves the game of golf. In his 40’s he was a scratch golfer. In the past few years his game declined to the point he couldn’t get much yardage at all and he was, prior to getting this current vest, ready to give it up. Golf was so fatiguing for him, and he was not having any success. He could barely finish one round of 9 or 18 holes depending on the week. He was quite discouraged. With the current vest, he increased his yardage by about 30-40 yards, and he has much less fatigue when he plays. He is able to play more rounds in a week. The golfers who have watched him play for many years have taken note and commented on his progress lately. They stated the vest makes him more stable and he is hitting the ball farther. When he goes to the tee box now he no longer thinks about falling over, no longer fights to keep his balance, he just hits the ball as well as any 71 year old! Prior to the vest, Scott did not like to walk more than a few yards, it was too tiring and he felt too unstable, and feared falling. Currently with the vest he is walking on a track in our local park; he even managed to complete 1.3 miles recently. This is something we did not think possible. Overall, Scott has far less fatigue when wearing the vest, regardless of activity. Less fatigue is a huge factor because it means he remains more active.

How has BalanceWear affected Scott’s quality of life? How has it changed the way you and Scott think about Scott’s condition and abilities?

Scott has fallen multiple times in the past two years. The vest gives him confidence when he is outside the home, allows him to stay much more active in the things he enjoys. We feel more positive about the possibilities of engaging in activities we otherwise have discounted due to fear of falling and extreme fatigue.

What advice would you give to people who are wondering if BalanceWear might be right for them?

It is worth a try without a doubt. This is non-invasive, there is no harm done in trying it, and the outcome could change a person’s quality of life and allow them to participate in ways they thought were no longer possible.